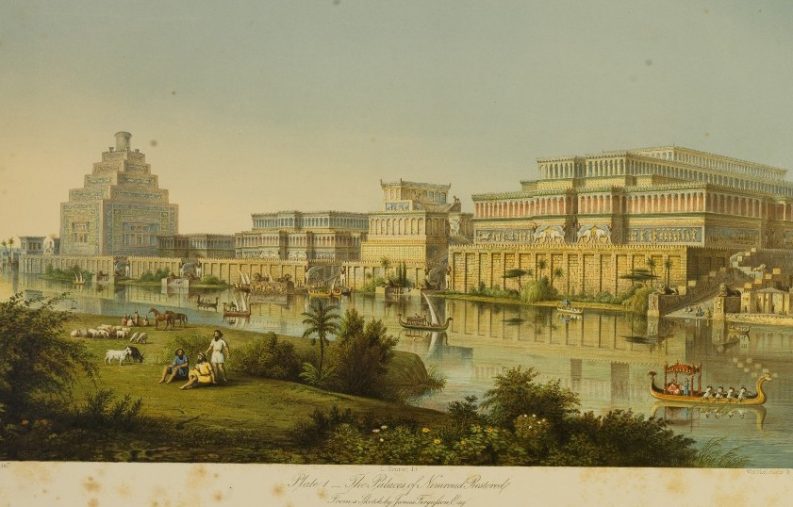 In connection with her talk ‘Nineveh’ in Bombay and Histories of Indian Archaeology at the Ancient India & Iran Trust on 21 October, Sudeshna Guha has kindly allowed us to repost her article on the same subject which was originally published by Scroll.in on 13 December 2015

A little-known 19th-century history of “Nineveh” in Bombay provides a glimpse of the many new histories, which collections, and their visualisation and displays, allow us to establish. It also underlines the importance of noting the ways in which we establish historical evidence, and recall and write about the past.

Between 1846 and 1848, Bombay received shipments of antiquities of Ancient Assyria (c. 900–600 BCE) from Basra, which were on their way to London. Many objects were spectacularly massive, such as the stone statues of human-headed winged-bulls and lions,bas-reliefs of scenes of battles and rituals, and tall obelisks. Others were smaller in size, and included alabaster vases, bricks, and fragments of incised and carved tablets. The objects were all collected and found during the excavations at Nimrud (near Mosul, Iraq) by the British explorer and diplomat Henry Austen Layard.

Biblical archaeology
Layard’s excavations bespoke of the competition and rivalry between the British and French for the ownership of the Biblical archaeology of Mesopotamia. He excavated at Nimrud between 1845 and 1847 believing the site to be the Biblical Nineveh, and competed with the “French excavations” of Khorsabad (also near Mosul) by Paul Emile Botta in 1843-44, who had hoped to find Nineveh. Unknown to them, Layard and Botta both unearthed remains of the palaces of  powerful Assyrian emperors, namely, Ashurnasirpa lII, Tiglath-Pileser III, Esarhaddon, and Sargon II. They shipped the vast bulk of the excavated objects to London and Paris for filling up the coffers of the British Museum and Louvre. The objects acquired semantic, and subsequently historical, value upon their arrival in Europe, and in the sensational receptions of their displays. The visual histories of “Nineveh” in Bombay do not appear within the European narratives of the archaeological discoveries of Ancient Assyria. However, the looming presence of Bombay within the travails of the artefacts’ journeys across the seas illuminates the growing cosmopolitan ambience of the Indian port city, which by the 1840s had attained pre-eminence as the facilitator of international commerce.

The first shipment of Assyrian antiquities from Basra arrived in Bombay in July 1846. The cargo belonged to Alexander Hector, a British merchant at Baghdad who had picked up the objects from a heap that had been thrown “useless”, and which contained artefacts from Botta’s excavations at Khorsabad. This was followed by two shipments of antiquities from Layard’s excavations. The first reached Bombay in December 1846 and the second in October 1847.

The searches for the whereabouts and displays of Assyrian objects within nineteenth-century Bombay assume significance because Layard, and following him the Trustees of the British Museum,accused the Bombay Government in 1848 of blatant vandalism and neglect. Layard fumed that his cargoes had sat on the docks for months, the cases had been opened, some of the antiquities stolen, and “even lectures” about the rifled objects had been given without permission and authority. The “loss of the valuable ruins of a great city and of a great nation” [that is, Britain], which Layard thundered about set the trend for all future recollections of his shipments at Bombay. However, the reports of The Bombay Times and Journal of Commerce reveal a different truth. They illustrate the care, enthusiasm, and scholarship with which the antiquaries of Bombay had received Layard’s shipments, and document the early histories of the museums for the city.

Much before Europe
Upon arrival in Bombay, the objects from Hector’s cargo were exhibited at the “Grant Road Buildings”, which The Bombay Times denounced as a “swamp theatre”, and a “place of public amusement [where] no one ever went to be amused”.

In contrast, Layard’s cargo was specifically exhibited by the members of the Asiatic Society of Bombay, who had avidly followed news of his excavations, within the premises of the Society’s Library at Colaba during December 1846 and January 1847. Viewers noticed that the armlets on the winged human figures resembled “those worn by lower caste Hindoos”, the “horse trappings” on the plaques were similar to those used by the “rajahs and surdars of the Dekhun” and the swords held by some of the sculptures bore “true likeness of the ones used by the ‘Mahrattas and Mahomedans’”.

Notably, this viewing of the Assyrian antiquities preceded the vexation with the exoticism of the objects within the European world, and the descriptions inform us of the intuitive uses which we make of the analogical method for creating knowledge of the unknown. In noting the description we are also led to reflect upon the ways in which visibility and materiality is often endowed upon the non-present past, and such reflections are important for the archaeological scholarship considering that professional archaeologists continue to convey the impression that they see and unearth histories from the ground. 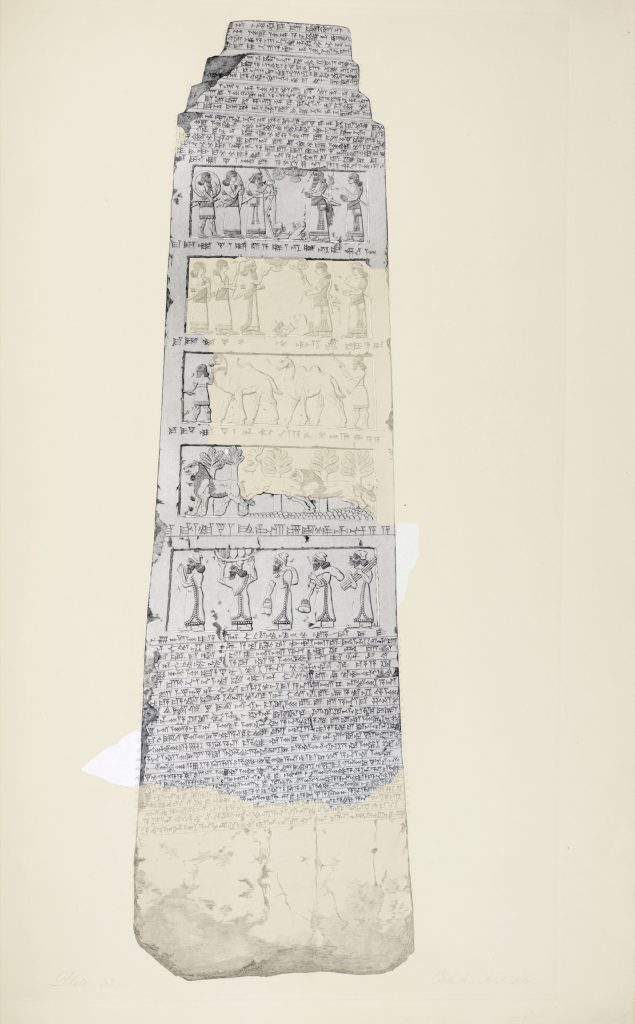 The ‘Black Obelisk’ at Nimrud, ‘First Side’. Engraved Plate from Drawing by George Scharf Jr., 1846–7, The Monuments of Nineveh, plate 53

Contrary to Layard’s belief, the Asiatic Society had also sought sanction from the Bombay Government in 1848 for creating plaster cast replicas of select objects in his second cargo, including the “black obelisk of Shalmeneser.” The plans for the undertaking touched upon issues of preservation and was fully premised upon the plea that “few would have the chance to see these in the British Museum”. In February that year, Bombay was also gifted 10 “fine slabs” from Nimrud by the British resident at Baghdad, Henry Rawlinson, who had visited Layard’s excavations in 1846. Rawlinson’s gift bespoke of the stellar career opportunities which the city had offered him when he was a resident, and a cadet of the East India Company. The “slabs” were exhibited in the Town Hall as the foundational, and infant, collections of the “Central Museum of Natural History, Economy, Geology, Industry and Arts”, which was then being planned for Bombay. The Economic Museum, as the building-less institution was subsequently referred to, was eventually re-fashioned as Bombay’s city museum. The latter opened to the public inside a new building in 1872 as the Victoria and Albert Museum and Gardens, and a hundred years later, in 1975, was re-named the Bhau Daji Lad.

Echoes from the past
The displays of “Nineveh” in Bombay resonate within the frequent demands that were made by the residents of the city for civic amenities. Thus, in 1855 a group of citizens demanded that “the streets and alleys of Bombay be surveyed and laid down with something like the fullness and precision with which the capital of Assyria had been represented”. The exhibits in the Town Hall inspired many public lectures, and some were performed musically with harmoniums. They aided the collection of a “large sum of money” towards a building for the Economic Museum. However, in 1859 the curator of the still virtual Museum George Birdwood felt the need to emphatically declare that a “read and shrewd traveller recalling the story of Babylon, Nineveh, Tyre, and Jerusalem would naturally anticipate the highest manifestations of intellect within the gates of Bombay. But alas such a visitor would search in vain” for museums, theatres, fountains, markets, art galleries and stately homes in the city.

The Economic Museum had been intended as a repository of the agricultural, mineral, technological artistic and handicrafts wealth of the Bombay Presidency, for enhancing knowledge of the commercial possibilities of the region among the British and Europeans. The agency of the “foreign” objects towards the causes for a museum displaying local wealth, which Birdwood’s declarations reveal, illuminates the transnational and culturally hybrid nature of all antiquities. 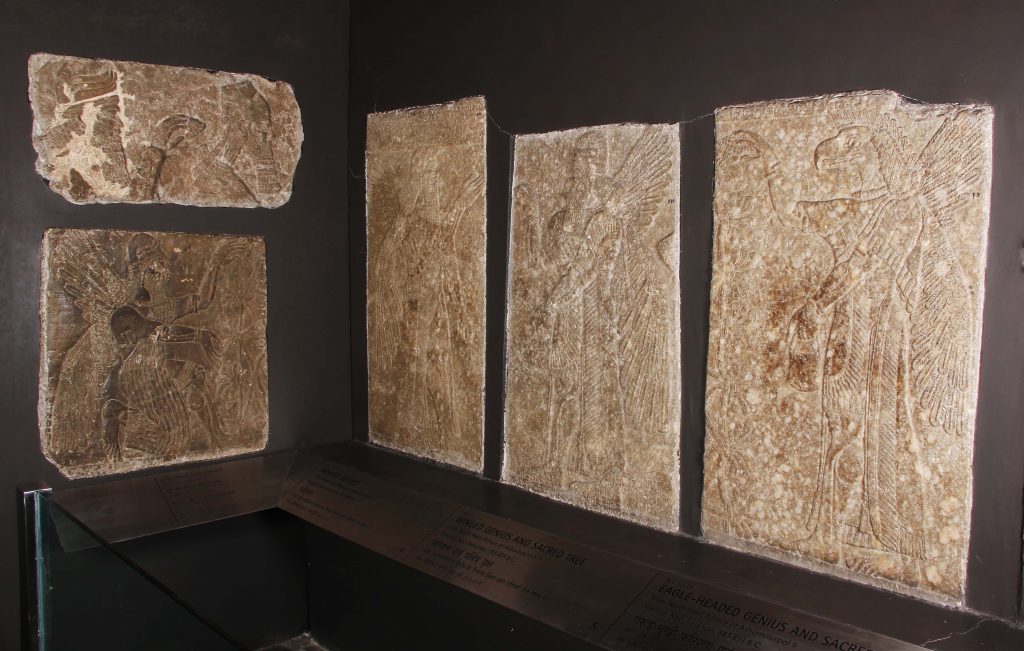 Unlike the fate of the Assyrian exhibits at the British Museum, which the British establishment began denouncing as “very bad art” from 1851, viewers of “Nineveh” in Bombay highly valued the aesthetics of the objects which they saw. This history of differential evaluation allows opportunities for enquiring into the possible presence of an oppositional aesthetic within the Indian approach. The aesthetic conveys resistance and protest, and the enquiry would also facilitate the mapping of the different responses towards the Assyrian objects by the different communities of Bombay.

The powerful presence of “Nineveh” in Bombay during the 1850s has left very few visual imprints within the architectural fabric of the old city. However, the history of this presence is made totally invisible within the present-day exhibition of the Assyrian collections at the Chhatrapati Shivaji Maharaj Vastu Sanghrahalaya (CSVMS). Is the Museum’s Assyrian gallery made up of the Rawlinson gift, which the Parsi antiquary Rustomji Karkaria believed he had found forgotten within the premises of the Asiatic Society in 1891? Or does the display comprise an object or two from Layard’s cargo, considering that 12 reliefs from Nimrud are exhibited? The question compels a critical regard of the labels and texts of the only Assyrian gallery in India, and inevitably homes in on the importance of excavating the life-histories of collections for memorable museum exhibitions.

Illustration at head of post: ‘Restoration of the Palaces of the Western side of the platform at Nimroud’, lithograph from drawing by Baynes, supervised by James Fergusson, ca. 1850, from A.H. Layard, A second series of the monuments of Nineveh (London, 1853), plate 1