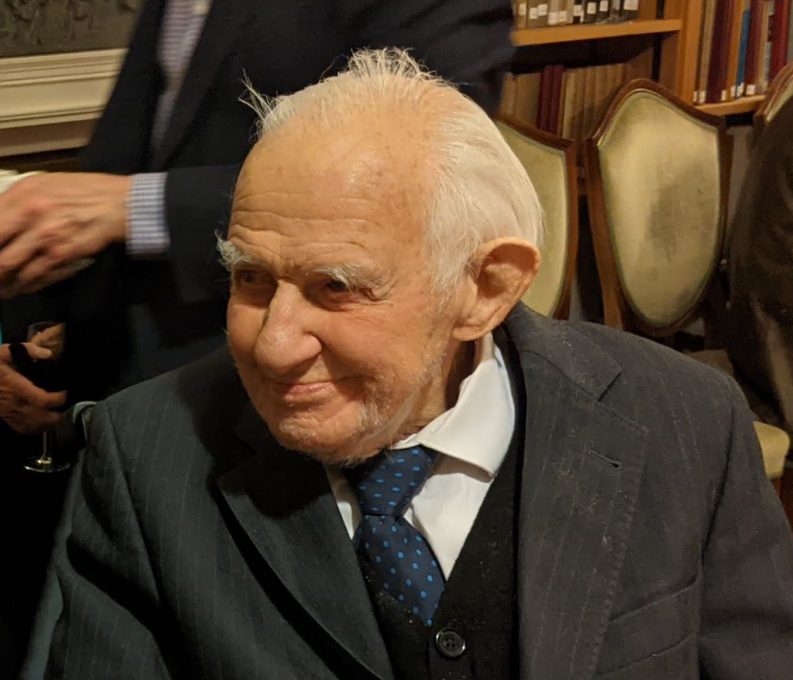 On the evening of 26 November the Trust hosted an unusual event, to celebrate the 100th birthday of James V. Kinnier Wilson, a frequent attendee at the Friday Lectures. At Exeter College Oxford, after wartime service on the North-West frontier and in Burma, James studied Akkadian and Hebrew at the feet of Oliver Gurney and Godfrey Driver, with an M Litt in 1950, and his path then took him via Durham, Chicago and Toronto to the Akkadian teaching post at Cambridge in 1955. Here in partnership with Margaret Munn-Rankin he established and developed the Assyriology course until his eventual retirement in 1989. Thanks to his participation in the work of the Chicago Assyrian Dictionary, during which he edited the botanical series Uruanna mashtakal, his students benefited not only from his own innate abilities, but also from the insights he brought from the likes of Leo Oppenheim, Benno Landsberger and Thorkild Jacobsen.  Like the Faculty, which replaced ‘oriental languages’ with ‘oriental studies’, his enquiring mind embraced a range of fascinating topics, from the menus of the kitchens at the Assyrian palace at Nimrud, to the story of Etana and the eagle, the legendary accounts of the flood and connections between Mesopotamia and the Indus Valley.

Among our 25 guests were numbered several generations of his students from the 1950s to the 1980s, colleagues from the Oriental Faculty staff and library, and all James’ successors in the Akkadian teaching post down to the present day. Throughout his time in Cambridge one of his closest colleagues and friends was Sir Harold Bailey, a founding trustee of the Trust, and by torchlight as part of the celebration we planted a young tamarisk at the west side of the front garden, with this inscription:

‘This tamarisk was planted here on 27th November 2021 to mark the 100th birthday of James V Kinnier Wilson mainstay of Assyriology in the University of Cambridge and long time friend of Sir Harold Bailey’.