This week’s lecture at 5.30pm on Friday November 3rd at the AIIT: Mark Elliott (MAA, Cambridge) ‘Curating Another India: object histories and contemporary voices’
All welcome. Refreshments from 5pm

The Museum of Archaeology & Anthropology (MAA) cares for rich and eclectic collections of artefacts and images from India and South Asia, which have been largely unresearched in recent decades. The results of archaeological excavation, ethnographic fieldwork, colonial administration, missionary expeditions, travel or military operations, what these collections have are important stories to tell about the people who made and used them as well as the people who chose them and brought them to Cambridge. Some of these stories, and the work of disentangling them, will be told in Mark’s lecture this Friday. 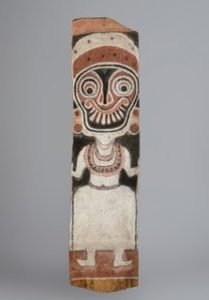 The striking painting (featured in this post), by a young woman of the Malayan Adivasi from the village of Pattanur, was collected for the Museum of Archaeology & Anthropology (MAA) by Cambridge anthropologist Kathleen Gough in 1948. It’s one of the surprising and complicated artefacts from India and South Asia in the MAA collections that curator Mark Elliott will be talking about in Curating Another India: Object Histories, Contemporary Voices.

Photo: Image of the god Guligan painted by an unnamed woman of the Malayan Adivasi from Pattanur, Kerala, India.
Collected by Kathleen Gough, 1948. Museum of Archaeology & Anthropology 1949.684