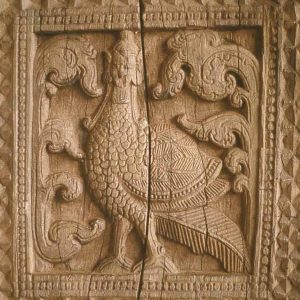 The Embekke temple is situated in the region of Kandy in south central Sri Lanka. Dedicated to the guardian deity Kataragama (from the Hindu Skanda or Murugan, the lord of war), it was established in the period of the Gampola dynasty, c.1341-1411, and is a magnificent example of the woodcarver’s art. The shrine, particularly its drumming hall or Hewasimandapa, is pillared with octagonal shafts of Ceylon ironwood, richly carved with panels depicting foliage, animals, birds and human figures.